They say do something for 40 days for it to become a habit but I made more than just that. I did 365. Two days ago I hit the one year mark since I decided that counting calories is the way to go if I need to succeed in hitting my target weight. On August 8, 2017 I started using MyFitnessPal app.

The journey didn’t start easy. I had some doubts but I soon trusted and believed in the process of counting calories. It was a conscious effort of knowing what I should eat and how much of it I should take on a daily basis based on the app’s recommended calorie intake. It also involved lots of exercise which happened almost everyday as well. Food minus calories burned from working out was my guiding formula.

Gradually I hit 130 lbs in February or six months later. I was never this light and fit since college days. Next challenge though was to maintain it. Like every weekends I would feel anxious whenever the scale shows I gained weight. I soon learned to embrace the spike and labelled it as mere “weekend weight.” We all deserve guilty pleasures, right?

I recently posted a pic of my work drawer showing food I thought would help me lose weight. Everything looked like healthy food but I soon discovered some are culprits to my weight plateau. Since I logged my meals on MyFitnessPal I avoid anything white as these are highly processed. So lesser white bread, crackers, and even pasta. These don’t directly get one fat but because they aren’t retained longer by the body due to less fiber, the next cravings come sooner. This is why brown became my favorite color since then.

I plan to let go slowly of my dependence to Under Armor’s MyFitnessPal app. No specific program or diet yet but I’ll just likely eyeball it or just use ratio and proportion as what others do. We’ll see if this one works for me. Wish me luck.

For something to be resolved, the root cause must be recognized, and it has to be either fixed permanently, if not controlled. This must be my week’s theme. A year ago, thanks once more to Timehop, I realized all my efforts to lose weight were going nowhere. I ate less, I worked out, I ran but all were in vain. Something was stopping my desired progress.

A picture of my mobile personal drawer reveals I packed to work bread loaves, bananas, crackers, protein powder, and eggs (in small blue container). All seem the ideal weight loss food, or so I thought. Few more days later I’d discover some of these contribute to my weight loss plateau. Do you recognize the errant food? I’ll reveal it when I reach my first year of using MyFitnessPal. 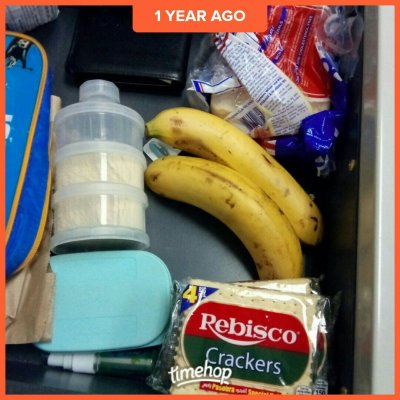 Saw this Tweet on Facebook (?) and I couldn’t agree more with the message. We recently had a long talk, over my sleepy state coming straight from work, with our son to remind him that there would days when we stop being friends with him. It is when we wear our parent’s hat and call him out when we need to so he grows up as a good person instead of a brat who knows no direction, observes no manners, and respects no rules. Frankly speaking, I hate such parenting talks but it has to be done. Sometimes we just have to dare be hated if it’s what it takes to remain in control. If only some leaders realize this too.

There was once a time when losing weight was quite a struggle. There’s the gym but it requires membership. There’s your friendly liposuction clinic but obviously it’s invasive not to mention expensive. There are also self-help books on counting calories but these have limited recipes and rarely include nutritional info while some of it have ingredients that aren’t available locally. Where do you get kale, collard, cottage cheese, or quinoa? Go figure.

Fast forward to the era when almost everyone has mobile phones and almost everything starts to have its own app. Modern technology now makes losing weight interesting and fun. Weight watchers nowadays have more control, timely feedback, and could take actions fast like passing off on a slice of shortcake because calorie goal has been reached. Freeze it and tomorrow’s another day.

Seven months ago I was looking for a solution to my weight loss plateau. It’s the dreaded point of anyone trying to lose (or even gain) weight. Common knowledge dictates eat less, exercise more but it is easier said than done. Often times this hit or miss leads to under nourishment, sickness, and eventually, failure. I’ve seen people going back to square one and never attempting to cut weight ever again due to disappointment and/or lack of motivation.

This is where the apps come in. There are several apps that help count calories but I use Under Armor’s MyFitnessPal which is among the popular ones, if not the most, under its category. Since I started using it in August I have never turned back, never skipped a day without entry of my meals. The results gradually followed and goal finally reached. Thanks to data-driven weight loss.

MyFitnessPal allows its users to customize their own weight loss plan. Goal could be as aggressive as a 2-lb loss per week or just take it easy at .5 lb per week.

The app’s weight goal factors in the user’s activity level from Not Very Active to Very Active. Mine should be the former but since I have the leisure to take short breaks when my Garmin says Move! I set mine on Lightly Active. I normally achieve 10 stairs level (up) and 5,000 steps daily.

Of course, counting calories means food consumed versus daily calorie goal. This is where MyFitnessPal’s huge food database becomes an advantage. You may now start throwing away those diet self-help books you bought from the thrift shop. If you’re Filipino or Asian or anyone but American most likely those paper books do not include local dishes. So far everything I ate are on MyFitnessPal: sinigang, tulingan, sisig, tuna pasta, pizza, adobo, kamoteng kahoy, kangkong, balut, bulalo, sweet potatoes, bananas, eggs, etc. Whether it’s English or Tagalog food name, this app would have a match for it.

After all meal entries are in, the app predicts possible weight result. When I started months ago I smirked when it said I would be 145 lbs. Well, it happened, breached it even further and I never doubted the app since then.

Interestingly, sooner or later calories wouldn’t be the only thing that matters. Anyone who gets more serious about diet and nutrition would be asking about nutrient details like sodium, cholesterol, polyunsaturated, monounsaturated, and trans. Then there’s also the question if where the calories are coming from. Does it come mainly from carbs, fats, or protein? MyFitnessPal got these covered.

There’s a big caveat to all this. MyFitnessPal computes based on accuracy of the user’s entry so honesty is a big factor here. User details like height, initial weight, activity levels must be all correct. Needless to say, if it’s two slices of apple pie you ate it must be two apple slices that should be entered or else weight predictions would remain a number and not a reality. And your bathroom scale would surely know.

There are also basic tools I use to complement the app. I have a cheap digital kitchen scale my wife got online and on most days I wear a Garmin Vivoactive HR watch that records calories consumed based on my physical activities such as running, walking, intervals, stairs climbed, etc.

The Garmin smart watch pairs with MyFitnessPal app and calorie goals are adjusted accordingly. I found some discrepancies though on how MyFitnessPal adjusts so I would ignore the big numbers whenever I see them.

MyFitnessPal is free but it has a premium package if you want to be more detailed about your diet. Free works for me for now.

Revision: I won’t sleep tight if I don’t include the barcode reader screenshot and change the boring title.