After all the speculations, spy shots, automotive forum excitement and anticipation, the new Honda City 2009 was finally introduced this week. Incidentally, this happens to be exactly a year after we bought our 2008 model. When I saw the pictures of the new City, I felt the same excitement I had last year while I was drooling over what was then considered as brand new. Now, somewhere out there I’m sure are thousands of anxious individuals who have already spent several sleepless nights thinking over and over again if this car is indeed a good buy.

Being one of those curious what the fuss is all about, I checked Honda’s website and saw that the City has indeed evolved a long way from its predecessors. In fact, if not for the rear emblem that says it’s a Honda City, this car may be mistaken as anything but a City. And this is where hot discussions and exchange of opinions come in.

At first look, especially coming from a year-old owner of the 2008 City, it cannot be denied that I appreciate the fact that this new model appears to be sleeker on the outside and more spacious in the inside. Fans of the new Honda Accord who fall short of their budget, would likely have some thinking to do now because the resemblance of this car is all over the City — same reason why I’ve been daydreaming about it. 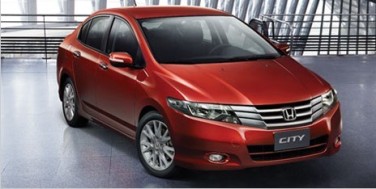 Is it a Honda…

But Honda City designers need not put their heads high just yet. This is because once the 2009 City is viewed from its sides, the feeling of looking at something familiar yet “un-Honda” is there. It’s a shame but it’s as if some designer from Toyota had his hands on this project because the profile of the City shows hints from the 1st generation Vios – especially when looking at the tail light from the sides. To verify if it’s just me and my untrained eye, I searched and found a discussion on this. Check out paultan.org. I rest my case.

At the end of the day, after all have been said and done, two things are certain: that someone coming right out of the Honda showroom will be another proud owner of the 2009 Honda City; and there will be one envious driver tailing the brand new Honda City wondering when the recession ends and if dreams of salary increases do come true. Ti abi.