It’s been years since we’ve savored sea, sand and sun. The last one we had was in 2006 when I tagged along with wifey being one of the top employees of the year who were treated for free in Boracay. It would be one of the worthy memories with our company. So on April 2, April Fools ’ Day in the US, we embarked on a road trip to see the beach once more.

It was a trip full of mixed emotions. We looked forward to fun and excitement in spite of the impending uncertainty and anxiety. The trip would be our farthest down south but it was fun as we passed along good roads and scenic views. We located La Luz beach with ease, thanks to the directions I printed from the internet. The last 4-kilometer stretch was a challenge due to the rough and dusty road with a couple of hill climbs as a finale to our destination.

We learned that the resort is already fully booked so we decided to settle in one of the local’s rental place–a nipa hut managed by Aling Ely—instead of going back to find another resort. Besides, I’ve been curious what if feels like to sleep, even just overnight, in one of those rooms.

As soon as we got settled, sad news came. In that small room is where we learned thru SMS from a colleague that the long standing rumor is now confirmed. The company’s top bosses flew in from the US that same day and have already told the news to all Cavite employees that the company is pulling the manufacturing operations out of the country in 6-9 months. An April Fools’ day joke? A thousand Filipino employees for sure wished it was, but unfortunately, it was not.

Setting the expected news aside and having had my mandatory siesta, we checked the beach. No big deal, we’re just going to be unemployed. The weather that afternoon appeared just as confused as we were. It rained hard but it quickly dissipated. The sun beams came out of the dark gray clouds after a brief but heavy rainfall. 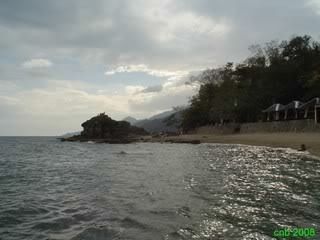 The beach at that time was rather serene which I find unusual given the fact that it’s summer. The water was fairly clear yet the waves tend to be strong. Some portions underwater are also uneven and may surprise anyone unfamiliar with the area. And one thing I can’t help but notice was that sand all over the place is quite loose. Must be where the name La Luz was derived – from being La Loose. Ti abi. A few meters of treading on the loose sand (or pebbles) drained most of my energy. With every step we took,my stomach protested. Hunger eventually sets in.

Looking for food was also unexpectedly hard. Other than failing again to get reservations in La Luz’s dining, the surrounding area itself is scarce of bars or restaurants. Although there were some kainan or carinderia, the choice of food that you expect to eat while at the beach were not available. I find it ironic that we had a difficult time finding fresh inihaw na isda (grilled fish). Thankfully, after crisscrossing and thoroughly combing the nearby area like two hungry stray cats, one resort’s bar accommodated us as walk-in customers—believe or not we’re the only customers at that time so that could have left them no choice. Weird.

Night time was more quiet. With my San Mig lights beer from Taramandu bar, my wife and I settled in one of the cabanas with the dim incandescent light coming from the distant posts as the only illumination. It was a perfect time to talk about lots of things—our job, for one. It was also a perfect time to do some star gazing which as far I can recall I haven’t done for years without the distraction of honking cars, TV shows, noisy neighbors and interference coming from the street lamp post. The beach that night was almost pitch black. The only star that night, well, are the stars.

We went home the next day after sleeping over at the nipa hut.  I had a very good sleep that night even with just having only an electric fan for ventilation. The native materials from roof (nipa) to flooring (bamboo) allowed good ventilation. It was a change from the usual air-conditioned rooms we’re used to when we travel. Except for the toilet where my wife discovered some friends from Joe’s Apartment (go figure), the overnight stay at Aling Ely’s place was worth the price (Php 1.2K) and the experience.