This afternoon I woke up from a long nap and being half awake half asleep, I strolled around the yard. Coming from a distance, I heard a familiar music playing that reminds me where I’m currently at.

The music was Life Dance followed by another which I’m quite sure I heard decades ago when both are still the in thing among the youngsters. I hate to admit it but I was one of the fans of these songs. My guilty pleasures, then and now. After catching myself pausing briefly to listen to the music which I know for a fact and based on experience, are all coming from a baylehan (dance/fiesta area) as we call it, I began to remember that prior to my mandatory siesta, we actually just had our son’s baptismal.

This event, thankfully, happened after one postponement due to a problem we encountered when we initially scheduled it in my wife’s place back in Batangas. This time, it was finally realized and despite bits of snags, upsets and confusions before and during the ceremony. Thirty minutes after the baptismal rites and photo ops, we ended at Imay’s restaurant where a simple yet fulfilling celebration with our closest family and neighbors took place.

I’m now still groggy and trying my best not to blame it either to the brandy I had nor the jet lag since we arrived yesterday lunch time. But deep inside I feel happy as after all the excitement from welcoming Marcus to the Christian world, I suddenly remember that also today is our father’s 75th and likewise my 35th birthday. Right now, I can’t think of a better way to be home again in Bacolod. 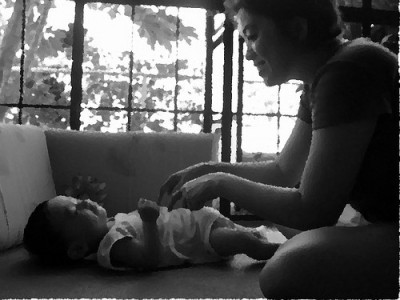