This afternoon I was once again in the waves of ennui, surfing the internet trying to figure out what to do with the rest of my Sunday while feeling guilty of having to skip mass again and while also waiting for my wife to come home.

Emails checked. Multiply.com updates checked. Friendster.com scanned–not much friends here. Favorites list scanned back and forth. Lurked forums done. Emails rechecked again for the nth time in just a couple of hours. Thankfully I’m free from mouse to keyboard ratio recording or I could be sending red signals to the ergonomics guru of our company.

Not really knowing how to bail out of my PC’s chair which is getting butt-hot while I move the mouse aimlessly, I suddenly realized I was looking at Formula1.com’s interview with the recent winner of the Canadian grand prix, Robert Kubica. Having watched this race’s replay I must admit that it was one of the most exciting I’ve seen so far this year. It’s one for the books of fame and for the books of unfortunate events which by the way F1 races will always be I guess. Even Michael Schumacher has his own share of fame and shame.

In this race Lewis Hamilton rear-ended Kimi while on their way out of the pit lane that brings the conspiracy theorists like me raise an eyebrow out of suspicion. Hmm. Robert Kubica of course wasn’t one hypocrite not to accept the fact that he felt more hope when these two leading drivers crashed. It was not only his day to win but it was his day to lead the drivers’ championship with 42 points. His consistency during the past races eventually paid off and June 08, 2008 became the day for him to be in the middle of the two drivers in the podium for the first time. It was the day BMW claimed the most coveted win of every races. It’s the day their sponsors have been waiting for. Wait, something looks familiar in the picture. Ah, our company’s logo.

I’ve got used to seeing Mclarens, Ferraris, and Renault exchanging top positions for years that it took me until now to realize that right beside BMW’s logo is Intel’s. It may have something to do with the fact that Intel’s Philippine site is closing this year that I forgot to cheer my heart out when the whole BMW team was cheering and savoring the huge champagne during the awarding ceremony.

BMW and Intel’s win may have been late to be fully relished especially for us working for the latter but as they always say, “A win is a win.” Now I don’t know if I’d be celebrating next time if BMW takes the 1-2 position once again. Hopefully yes. 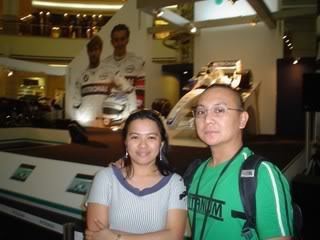 When we had our pictures taken in front of the team’s mall display back on April 2007 in Suria KLCC I never thought the BMW guys behind have any chances of winning a 1-2. Now, I stand corrected.